Why prefabrication construction is more common than you think

Industry news predicts that prefabrication in commercial construction will be the next big thing (it has been hovering around since 2016). With the onset of COVID-19, prefabrication’s huge growth in demand again has made headlines—and continues to do so. Recent data from the Contractors Association of America continues to beat the drum for the power and promise of prefabrication construction, reporting that 23% of firms had taken steps to implement tools like offsite prefabrication to improve job site performance.

So if prefab construction is the way forward, why aren’t we seeing more of it?

The truth is we are, it’s just not obvious. While there a handful of companies pioneering a fully modular approach and selling prefabricated systems such as Katerra, Fullstack Modular and Prescient, many other developers, design-build firms and general contractors actually are using prefabrication, panelization or modular construction on some or all of their projects. They just aren’t advertising it. 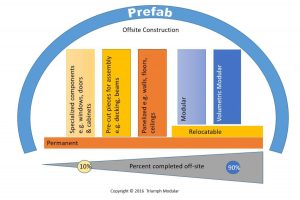 In a recent conversation with more than a dozen project managers in Denver, the general consensus is that they are using everything from prefabricated decks and elevator shafts, to trusses and walls, to entire pre-framed apartment sections and entire precast parking structures.

One project manager said, “I think that most construction these days has a prefab component to it. We don’t advertise ourselves as a prefab or modular GC, however, we have been utilizing offsite production for as long as I can remember.”

The fact that prefabrication is most often utilized for specific elements of the structure and is mixed with on-site construction means the commonality of it isn’t making the headlines.

Is prefabrication or modular construction inappropriate?
While it is easy to imagine a well-established building type such as a multifamily facility, hotel or healthcare facility applying the principles of repeatable manufacturing to their entire projects, many building types are unique and require design and construction specific to their individual facility.

The “Prefabrication and Modular Construction 2020 SmartMarket Report” states that a whopping 92% of survey participants said that their project types are not applicable for prefabrication. The reason for such a high number could be attributed to a number of factors, including:

When asked if he was using any prefabricated components, one Denver project manager said, “You mean like framing that comes out as walls? Well, that’s not actually prefab as I tend to think of it. Prefab to me would be like a trailer or a modular home.”

This brings us to the next reason: lack of universally acknowledged and understood definitions like modular, prefab, prebuilt, manufactured off-site, panelized, etc. You get the picture. And these are the larger, less specific terms all indicative of what the general public understands to be “prefabrication.”

Asked if he used prefabricated components, another Denver project manager said he said his company used TRO for the majority of its wall sections.”

“Yes, Truss Ruff Openings,” he thought they were called.

These prefabricated assemblies all have their own terminology and are components of a structure carried out by a single trade on their part of the work. These parts can be manufactured off-site, but need differing degrees of additional on-site work to complete their integration into the rest of the structure.

They include things such as:

Rusty Williams, from Triumph Modular, says it is easy to see why people get confused: “Even industry publications seem to blur the distinction between terms.” In a recent blog post, he created a helpful diagram (see chart — Prefab: Off Construction) for his clients to help clarify the distinctions:

Prefabrication to shape the future
Katerra, Fullstack Modular and Prescient are all less than a decade old. In our traditionally slow-to-adapt construction industry, as the number of prefabrication manufacturers increases, the terminology will become more refined and better understood.

The major hurdles, such as high upfront and transportation costs, less than perfect installation manuals and kinks in manufacturing technology will be overcome.

As more large scale partnerships form, an increasing amount of data will become available to support the economic and environmental benefits of prefabrication in commercial construction. Turns out, the future is here after all.

Leslie Kinson is Strategic Development Manager at Global Construction has more than a decade of strategic planning and research experience.