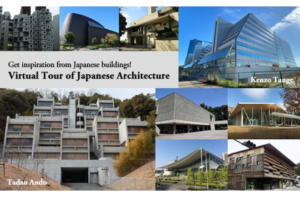 With this service, you can explore remarkable architectures all over Japan one after another.

Since 2009, MEGASOFT has researched and collected more than 1000 buildings’ information on their own, and now this database is going to share this information with the public. It starts with 100 buildings and will be added to daily in the future. This site includes;

MEGASOFT is a Japanese software development company whose flagship product is 3D housing construction design software.
In April 2021, MEGASOFT launched the website “Archi Designer JAPAN” which disseminates Japan’s unique living culture and architectural design to the world by making use of its abundant information and knowledge on Japanese architectural design.
Besides “Virtual Tour of Japanese Architecture”, free 3D materials and images of Japanese-style design are available for free, and a series of interviews with Japanese architectural professionals and designers are included as well.

Company Profile: MEGASOFT Inc. was founded in Osaka, Japan in 1983 as a software company. MEGASOFT strives to improve usability, promoting software development that delivers “Convenience,” “Comfort,” and “Impression” to everyone.