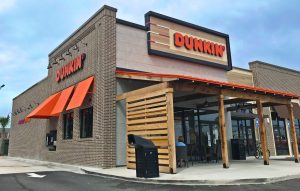 As light at the end of the 2020 tunnel finally comes into view, few businesses have escaped new challenges they did not see coming. From a variety of directions, it seemed as if unprecedented events either popped up or cascaded down on a weekly basis. For commercial construction builder Chris Tilton of Pooler, Georgia’s Dewitt Tilton Group, these curveballs only added intensity to a set of new ventures he willingly took on at the end of 2019.

A Savannah, Georgia, native, Tilton cut his teeth in custom home building before moving on to commercial construction. In 2014, he joined forces with successful real estate appraiser Andrew DeWitt. Since then, the company’s reputation has grown steadily over the years, with locals referring to them as “a powerhouse construction firm,” something Tilton takes great pride in. Rounding out the core team is Director of Operations Kim Thomas, a National Women in Construction past board member and certified by the Star Buildings System.

In late 2019, the Dewitt Tilton Group was contracted by Stature Investments to build The Shops at Lakeside Village in the rapidly-growing Savannah suburb of Pooler. An 11-bay neighborhood retail center was right in their wheelhouse, so it was a perfect fit. On this project, the developer wanted the interior of two anchor stores built out, an AT&T retail store and a “next generation” Dunkin’ restaurant on the same project schedule. Dewitt Tilton Group welcomed the task. 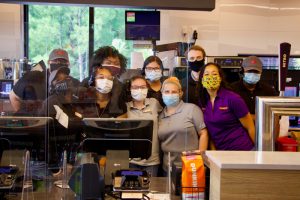 After working on the plans and schedule, Tilton expected the project to take about nine months. This ambitious plan was met with skepticism by the developer. “They literally said it couldn’t be done,” Tilton recalls.

He then set out to do it. A groundbreaking ceremony in late November 2019 kicked off the project. As the work began, “We enjoyed the details and the challenge, the whole team, from our office to the field,” he says.

Time management—what Tilton cites as the key to Dewitt Tilton Group’s success—would be tested in the coming months, not just from the pandemic, but also the new Dunkin’ design that still was being refined during construction. This included the kitchen, canopy, seating area, walls, floors, lighting, drive-thru lane and other inevitable issues. “I’m living in the future,” Tilton says, “I’m thinking of Step F during Step A.”

Another major advantage that makes Tilton’s time management work so well is an excellent relationship with subcontractors. “Subs love working with us,” he says, citing speedy and generous payment to trusted partners who prove themselves.

That trust came in handy when, as is their practice, multiple subcontractor teams were working simultaneously as the pandemic hit while construction was well underway. “The roofers, brick masons, framers and site crew all know each other, and we all respect each other,” Tilton says. “That really helps.”

Responsible, common-sense provisions, along with proper protective gear, allowed the project to continue unabated. After all, there was a deadline to meet.

The Dunkin’ interior build stands out from the rest of the project with extensive corporate-mandated rules and specifics. Meant to improve practices from other builds at recently completed locations, there also was an ongoing effort to finetune the design.

A continuing trend in quick-serve restaurants, the “next generation” Dunkin’ stores feature modern interior design, high-top seating in addition to booths, mixed-surface wall coverings, and in this location, a covered patio with wood pillars and a privacy wall. Dominating the counter is an eight-handle draft system dispensing cold-brewed beverages.

Thinking further ahead, Tilton also anticipated a delay with getting a public gas connection in time to meet his deadline. Early on in the project, he put superintendent Aaron Cradduck and office manager Baleigh Kelly on the case to assist with alternate plans. As expected, it became necessary to employ a propane tank. This process alone took five months to accomplish, but nothing was going to stop the team from completing the project on time.

Rounding the bend…
The final stage of the build is a testament not just to Dewitt Tilton Group’s time management, but its attention to detail. Last-minute exterior problems that Tilton’s team tackled included a poor fit between the drive-thru curbing and the window, and late changes to the Dunkin’ façade, including changes in the drive-thru canopy. Inside, one last kitchen issue to correct was the hood over the cooking area.

Like the others, these problems were solved not just on time, but ahead of time.

On a sunny August afternoon, Thursday the 27th to be exact, a ribbon-cutting ceremony was held at The Shops at Lakeside Village outlet in Pooler. Tilton, the Dewitt Tilton Group staff, and its subcontractors had pulled it off. Nine months to the day from the groundbreaking, Dunkin’ was open for business—weeks ahead of schedule.

With a very ambitious timeframe to begin with, the typical pitfalls of a complex project like this, and a global pandemic, time management won the day. When asked what is most satisfying about this accomplishment? “Nine months before it was dirt and shovels,” Tilton says. “Then local dignitaries are at the ribbon-cutting and customers are lined up out the door. I love being part of that business’ success.”

His clients love it, too. “It is an amazing thing to be able to celebrate the opening of The Shops at Lakeside Village a few weeks ahead of schedule,” says Yash Desai, President and COO of Stature Investments.

Frank Ricci is a Savannah-Georgia-based professional writer with Cecilia Russo Marketing. During his career, he has lent his talents to Mandalay Resort Group, Dell, Gulfstream Aerospace, Root Sports Network, Mirage Resorts and the Savannah College of Art and Design.