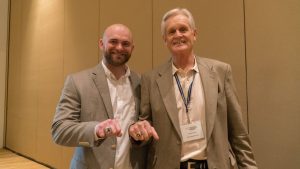 The long-time industry veteran and consultant for Prime Retail Services on his days as a member of the Cincinnati Reds’ Big Red Machine, why the follow up is the most important part of the job, and who you should trust when everything is on the line.

Most cherished item in your home office?
My 1975 World Series Championship Trophy replica.

What is the background noise that plays as the soundtrack in your office?
Mostly it is the Brian Kilmeade show on the radio and the Christian radio station.

What does your typical work day look like?
I start out by reading a devotional on my computer. Then I do my sales consulting for Prime Retail Services. 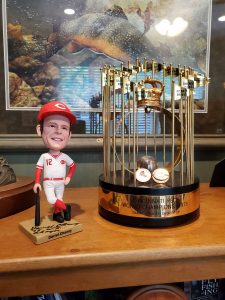 The Darrel Chaney bobble head that sits next to his replica 1975 World Series Trophy.

What is the craziest thing that ever happened to you on a jobsite?
I was on a jobsite with the first store we set up for PetSmart. The pavement to the loading dock wasn’t put in yet and our first delivery truck got stuck. We still got the job done.

What is your favorite World Series memory?
It was the parade in downtown Cincinnati after beating the Boston Red Sox in 1975. People were hanging out of every window of every building, and the square was filled with very happy fans.

Who was your favorite Braves’ announcer to work with: Ernie Johnson, Skip Caray or Pete Van Wieren?
I enjoyed working with all the Braves’ broadcasters. Ernie Johnson was like a big brother to me. Pete Van Wieren taught me how to prepare and Skip Carey was just too much fun to be with. Each of them are in the Braves’ Hall of Fame. Enough said.

Best game you ever called?
The 13th straight win to start the Braves’ season in 1982. 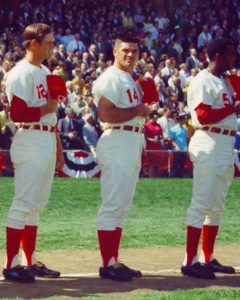 Darrel Chaney’s first Big League game at 21, standing next to the great Pete Rose for the National Anthem.

Bottom of ninth: two on, two out, runner on third. Who do you want up? Pete Rose, Ken Griffey or Joe Morgan?
It could have been anyone on that 1975 team. We had so many clutch guys. In 1972 vs. the A’s in the seventh game, I pinch hit with two outs and no one on in the bottom of the ninth. We were behind by one run. A’s super reliever Rollie Fingers hit me in the knee. So I did my job. Pete Rose was up next and I was ready to score from first on a single. But Joe Rudi made a nice running catch to end the game and the A’s were World Champs.

Favorite comfort food?
Give me a fully loaded meat pizza.

Biggest influence on your life?
My Dad, of course. Ernie Banks inspired me in baseball. You can read all about it in “Welcome to the Big Leagues, Every Man’s Journey to Significance,” the Darrel Chaney story. 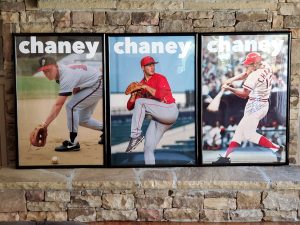 What trait to I most admire?
Integrity.

What advice would you give your younger self?
Don’t worry or be impatient. God has it already figures out. Trust in Him.

This entry was posted in CCR e-Digest, Newsletter. Bookmark the permalink.