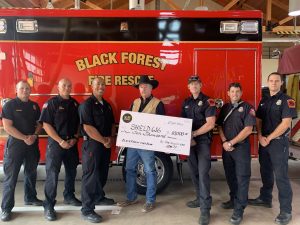 S-5!, the leading authority on metal roof attachment solutions, supports its local fire department through a donation to kick off a state-wide, 4-day, bike-a-thon and virtual telethon.

The fifth annual SHIELD616 Border-to-Border Ride began on Wednesday, Sept. 9 at the Wyoming/Colorado border and will end this Sunday, Sept. 13 at the New Mexico/Colorado border.  The volunteer ride covers 372 miles, three major mountain passes and an elevation gain of more than 18,000 feet.

SHIELD616 headquartered in Black Forest near Colorado Springs, Colorado, outfits first responders with protective gear – police, firefighters and EMS – and to date has outfitted more than 5,000 first responders in 22 states due to generous community members and businesses.

During the ride, local news station KOAA News5 is holding a virtual telethon to raise nearly $50,000 to purchase protective gear for responders within the Black Forest Fire Rescue. S-5!, based in Black Forest, donated $10,000 to kick-start fundraising efforts.

“People think we only fight fires,” says Black Forest Deputy Fire Chief James Rebitski. “This department does everything from medical transport, firefighting and hazmat. We don’t try to run into a bad situation; a lot of times the situation will develop around us. There have been many scenes over the years where there has been an armed assailant in the residence while we’re putting out a fire. There have been several times that we have actually had to post watches in the woods for an armed assailant while other firefighters put out the fire. I personally during my career have been shot at while on an ambulance. We have had many instances where there were guns in the house; we stumbled into what we thought was a medical call that actually ended up being a scene where people had been shot. You never know what you’re going to get into. That’s why having protective equipment that will get our firefighters home every night is crucial.”

In addition to this week’s contribution, Rob Haddock, CEO and Founder of S-5!, pledged ongoing annual support of the fire department. Haddock first established his charitable foundation in 2014 and contributes approximately $100,000 annually to a variety of non-profit, charitable organizations both locally and globally.

“Giving back to our community is important to our company and the folks who work here,” said Haddock. “The Haddocks have been in Black Forest now for four generations. The Black Forest Fire Rescue defends us against many different things. They’re more than firefighters; they are often the first on the scene. I dread to think but people have actually sniped at firefighters and even set fires to snipe at firefighters.”

This week, S-5! made a donation to – as they say at S-5! – get it started “The Right Way®.” “We’re willing, we’re able, and I wanted to see this fundraiser get kicked off ‘The right way.’ It’s incumbent on me, and it’s my privilege to be able to do this for SHIELD616 and for my own Black Forest Fire department – to protect our protectors.”

Established in 2015, SHIELD616 was founded to provide all-day rifle protection to first responders who sacrificially serve our communities.  Its mission is to protect our protectors.  SHIELD616 is headquartered in Black Forest and depends on Black Forest Fire. For more information, visit www.shield616.org.