Preventing Heat and Energy Leaks at the Design Stage 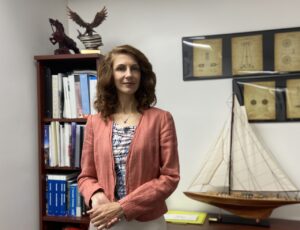 Marina Gorbacheva was born in Russia and educated at the Moscow Institute of Architecture. She got master’s degree in architecture. In her country, she was involved in the creation of general plans for architectural and engineering projects, as well as landscaping. It was at that time when she first faced a great dilemma: which is more important – the convenience of people or the preservation of the environment? Things that were rational, economical and efficient in terms of planning was completely unacceptable in matters of non-interference with the biological environment at the building site. Landscape design for example, assumed the destruction of lawns and the creation of asphalt paths instead of grass covered trees thinned out in the place of the project park and during the construction of cottage villages outside a city was completely cut down. Despite her professional interest, Marina felt sorry for violating natural beauty to people’s pleasure and she aspired to be an environmentalist in her field of activity 4 years ago, this aspiration brought her to the USA.

In order to get the right to work and develop her knowledge of the specialty in the USA, Marina took the Retraining Program Engineer Courses in The Cooper Union for the Advancement of Science and Art. For more effective study and interaction with colleagues, she completed the ESL Class at ASA College and began to gain experience in various projects to improve her professional skills. Marina Gorbacheva did not stop. She took another course at The Cooper College: Green Building Guidelines, Environmental Safety, which is dedicated to the energy-efficient construction of buildings that would prevent unnecessary heat emissions into the environment. This course influenced her vision of what she wants to do. Since then, Marina has participated as a consultant in more than 200 projects for the construction of buildings using energy efficient technologies.

A more effective cooperation with architectural and engineering companies, Marina Gorbacheva created her own one, Design Pro Group Corp., where she is president for now. Marina believes that it is possible and necessary to prevent heat and energy leaks at the design stage. At present, her company implements 3 main areas of consulting:

Her immediate plans also include an energy analysis of the architectural envelope.

These areas of consultation are relevant due to the need to comply with the Energy Code standards during construction, which prescribe the use of certain materials, technologies and allow certain energy efficiency coefficients for the entire structure or its individual parts such as walls, roofs, foundations, doors, windows and individual structures such as garages. These conditions vary from state to state, which is why architectural and engineering companies seek advice from Marina Gorbacheva. Together they select the appropriate materials, think over heating, ventilation and air conditioning systems in buildings. Marina can also point out obvious mistakes related to non-compliance with the Energy Code and suggest ways to solve the problem.

One of the most interesting and impressive projects in the career of Marina Gorbacheva was the construction of a school in Staten Island, state New York. The challenge was to optimize the ventilation of the premises and at the same time not release excess heat from the building. The Energy recovery ventilator was the solution. The system itself is not new; the installation of at least one such system for each new building is mandatory according to the Energy Code. Marina suggested using this system in every room of the school: from classrooms to utility rooms. Thus, in any classroom, students had access to fresh air without loss of heat. Thanks to this project, the building’s energy efficiency reached 90%, which is one of the highest rates for similar facilities in the United States in recent years.

The experience gained in Russia was also useful to Marina. In particular, she was able to apply the principles of organizing a heating system in Russia in several projects in the United States. As we know, homes in the states was heated by steam heating or heating using air conditioners. This is eco-friendly, but only in terms of the type of resources consumed (since both air and water are renewable resources). At the same time, such systems have low efficiency. Much energy is spent on air intake or heating water, is lost. 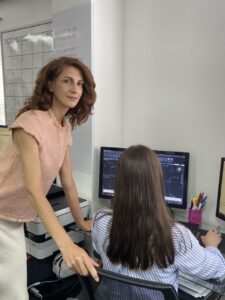 Marina proposed a system that operates in her homeland: implementation of central heating principles into a High Rise building. The challenge was maintaining stability and distributing hot water due to the height of the building.

The solution is to design a two: hot/cold water distribution zone with heat exchange on the 7th floor. This avoided heat loss from long run of piping from main heat source (three hot water heaters) located on the roof, to reduce the length of time it takes for hot water to get to a fixture or appliance, to conserve energy and allow hot water return water to circulate in the lower level. As a result, a water distribution system became more efficient with adequate stable pressurized temperature in the system with long run piping was avoided. Such as the cost of the system reduced and energy conserved.

Compared to traditional heating for us, installation costs are slightly higher due to the use of special equipment. However, less energy spent to warming up. Which means the entire system becomes more energy efficient. A pleasant bonus will be the reduced cost of utility bills.

Marina Gorbacheva proposed this option when creating two projects, and they proved their applicability: the cost of electricity and losses of heat and electricity have really decreased. Since such a system is unconventional for our state, Marina turned out to be practically the only person who could not only propose such a project, but also help in its implementation with practical advice.

Marina does not believe that she is engaged in some kind of supernatural or noble work.

“It was important for me to find a balance between human convenience and comfort and non-interference with the environment. People rarely realize that excess heat generated has a detrimental effect on the climate, for example. However, if you point out that they also pay for the heat that went into the atmosphere, their attitude changes. My task is to come up with and propose an alternative that would be profitable and understandable to a common person in the street and would lighten the burden on the environment. And, as it seems to me, I can do it”.

Marina is currently continuing her advisory work and developing new techniques for engineers and architects that could improve the energy efficiency of buildings.