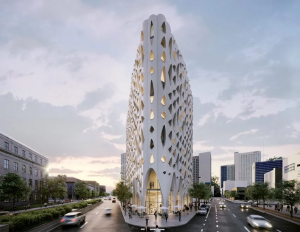 Integrated design-build firm, The Beck Group, is pleased to announce that its Denver office has been awarded the construction contract for Populus, the first carbon positive hotel in the United States, near Civic Center Park in the city’s downtown.

Construction of the triangular-shaped 130,000 square-foot hotel began in April 2022 and end in late 2023. The 265-room hotel will include a rooftop restaurant and bar offering spectacular views of the mountains and city skyline, distinct retail destinations and event spaces, and a light-filled lobby with multiple places for food and beverages.

Matt Archuletta, Project Executive at Beck’s Denver office, commented on the hotel project: “We are very excited that Beck was selected to become part of the team that will construct one of Denver’s most distinct hospitality projects. We look forward to working with our partners, Urban Village and Studio Gang, to enhance downtown Denver’s growing reputation as a unique and vibrant destination.”

Urban Villages is developing Populus to be carbon positive thanks both to its sustainable design and construction features as well as a substantial ecological effort offsite, including an initial commitment to planting trees that represent 5,378 acres of forest – offsetting an embodied carbon footprint equivalent to nearly 500,000 gallons of gas and removing additional carbon dioxide from the atmosphere. Populus will minimize its carbon footprint in the development stage using low-carbon concrete mixes, high-recycled content materials, maximizing structural efficiency, using fewer finish materials, minimizing waste, and more.

More importantly, Populus’ ongoing operations will also be carbon positive, so that the hotel’s overall use (operational carbon) along with every guest stay will be offset in addition to the building’s embodied carbon. The project will follow U.S. Green Building Council codes and is targeting LEED Gold certification, an environmental rating system developed by the U.S. Green Building Council.

Besides its unique triangular design, the building’s exterior mimics the characteristic patterns on the trunk of a species of an Aspen tree, Populus Tremuloides, as inspiration for the design of the building. The building’s distinctive windows echo the “Aspen eyes” while also designed to perform efficiently in Denver’s varied climate. The texture and rhythm of the façade is optimized to the program inside, with “lids” over each window extending slightly outward according to the shade the interior of the building and improves energy performance. On the interior, the windows change in size to reflect the public or private nature of various spaces, with windows up to 30 feet high at the building’s base that frame entrances and views into the lobby and amenity spaces. The Populus name is also fitting for the hotel project, which the developer envisioned as creating connectivity between people and their environments in Denver’s expanding community.

About The Beck Group

The Beck Group is a collaborative team of architects, builders, and technology experts transforming how its clients design and build. The century-old firm is the largest integrated design-build firm in the United States, with over 700 employees in ten offices across the US and Mexico. To learn more about Beck and how it designs and builds better communities, visit beckgroup.com.