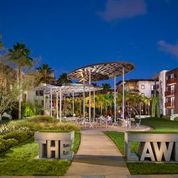 Decades in the making, Playa Vista has gained an enviable position as one of the hottest tech-driven real estate markets in the country. One of Los Angeles’s largest urban infill communities to date, Playa Vista has recently completed its second phase of development, and with it, not just another collection of residences, but a fully integrated urban village. This socially driven place, where people and their pets can live, work and play within the same community, is just minutes away from one of the country’s busiest airports and the heart of the film and entertainment industry.

The C2 Collaborative team has been involved with Playa Vista for over 20 years. From its inception, the plan faced the challenge of connecting existing coastal neighborhoods with the burgeoning creative offices and the retail district. It also had the luxury of a place rich with local history; innovators from the aerospace industry and creative giants like Howard Hughes who designed and built his “Hercules,” also known as the “Spruce Goose” in the place that is slated as the next home of Google. Other Playa Vista notable locals include IMAX, Yahoo!, YouTube and USC’s Institute of Creative Technologies. C2 Collaboration was faced with creating Play Vista’s front yard, the first impression to a community of 6,000 people within a high-density, creatively wired village. The developer was challenged with meeting open space park requirements and the need for effectively connecting decades of development into a logical framework. What started as a traditional urban parkway became what is known today as “The Link” at Playa Vista, a 27-foot wide and 3,500-foot long linear park that physically connects the residences along Millennium Drive to The Campus.

With borrowed space from the original parkway, The Link became an artful connection to a collection of social places, play spaces, community gardens, communal kitchen and pool club. A space that may have become a large community park was instead distributed throughout the village, providing views of the inspired greenway to hundreds of homes, with contemporary elliptical planters of shading palms and water elements reminiscent of aircraft shapes and forms. This extensive open space and the positioning of the surrounding residences became a value driver for the entire community, with invaluable curb appeal to potential residents.

Each park was inspired with its own exclusive character and function; The Lawn is the centerpiece of The Link and set adjacent to shops and restaurants, is defined by heroic, playful shade structures inspired by local flora and populated by young professionals on their lunch breaks. The Lounge is an animated resort-style gathering area where evening conversations can be had fireside. Common Grounds is The Link’s bypass lane where urban huts are suspended over a stream bed, providing an opportunity for a street-side escape. Corner Greens is where residents grow their own produce and then share at the adjoining state-of-the-art kitchen. All of these places create a uniquely memorable front yard, an exceptionally well-appointed back yard and places where all backgrounds can come together as a community and interact socially – a local piazza in a city of millions.