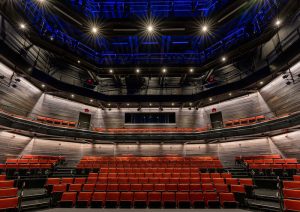 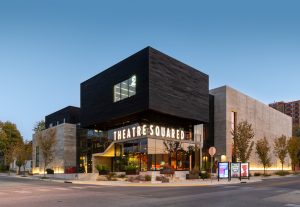 A project unlike any other in the American theatre community, the new facility unites two state-of-the-art theatres, the company’s first dedicated rehearsal space, offices, education and community space, on-site workshops for scenery, props and costumes, eight dedicated guest artist apartments, outdoor terraces at three levels, and an open-all-day café/bar on an active corner between Fayetteville’s downtown square and the University of Arkansas’s campus.

“With the support of the Walton Family Foundation’s Design Excellence Program for the creation of excellent public buildings, we were able to work with our ‘dream team’ of architects and theatre designers in Marvel & Charcoalblue,” TheatreSquared Executive Director Martin Miller said. “Our community loves how it interfaces with the downtown, with approachable but innovative organic materiality, transparency to the street, and an open-to-all ethos.”

Built by Baldwin & Shell, board-formed architectural concrete wraps both theatre volumes. The theatre’s mainstage is designed for perfect acoustic isolation and Marvel Architects and Charcoalblue’s innovatively designed artistic spaces, far from hidden, actually project from the facade. The studio, rehearsal space, and mainstage are all plainly visible from the street, so that no matter where an observer stands outside, it’s clear the building’s purpose is to create and experience live theatre. There is a nearby train that had been a huge distraction when using the former facility, so the new theatre was designed to be perfectly silent, from 24” walls to gaps between the steel and concrete to keep vibrations from passing through. Even the HVAC was designed to be completely silent. The stage and seating in the West theatre were acoustically designed so a person speaking at a normal volume on stage can be heard perfectly from any seat in the theater, even the balcony.

Designed for sustainability, the project exceeds national standards with repurposed building materials, all-LED lights, furniture milled from trees on site, enhanced commissioning, and efficient systems. Behind the building, the outdoor patio serving T2’s new dedicated guest artists’ apartments is constructed out of reclaimed brick from a 150-year old structure that once stood near the old Fayetteville Depot. Arkansas pine board-formed concrete and Kebony Shou Sugi Ban modified wood, charred by Delta Millworks, make up the building’s façade. After the concrete was poured, the pine was repurposed as interior finishes in the Spring theatre and rehearsal room.

With the new TheatreSquared building as an anchor cultural asset, The City of Fayetteville has now also received a grant through the Design Excellence Program to design a series of open spaces within an interactive, 12-acre Cultural Arts Corridor, creating a fully integrated arts district for the community.

Kebony is a high quality, sustainable wood that doesn’t require any maintenance besides basic cleaning. Kebony has proven qualities for a wide range of areas, and is often the preferred material for patios and exterior cladding. The Kebony Technology® is a patented and environmentally friendly wood treatment process originally developed in Norway. This process uses a bio-based fluid to improve the qualities and characteristics of the wood. The cell structure is permanently altered, providing the wood with the abilities and deep tan resembling tropical hardwood.

The company’s global headquarters is based in Oslo, Norway, with its production facility in Skien, South of Oslo. The Kebony USA team is located in St. Clair, Michigan, with local representation both on the East and West Coasts. Kebony has received numerous awards for its environmentally friendly technology and innovation, including its naming as a World Economic Forum Technology Pioneer and a Global Cleantech 100 company. Kebony has been embraced by leading architects, designers and developers, which are served through a global sales and distribution network.