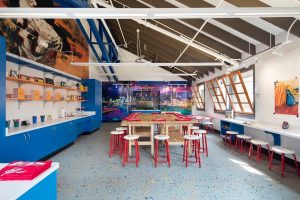 Alameda-based architecture firm, MBH Architects, is dedicated to giving back to the San Francisco community through design, architecture, and philanthropic efforts. When Good Tidings Foundation founder Larry Harper wanted to open a new arts center he called on the MBH team as he’s done before — this new collaboration marks the eighth project they’ve worked on together. The firm designed and constructed the brand-new LeRoy Neiman Arts Studio at the Boys and Girls Clubs of San Francisco Mission Clubhouse, providing a bright and inspiring space for children to express themselves and let their creativity soar.

MBH was brought in to renovate an existing art classroom area in the building, upgrading the space while making it fit for aspiring artists. The team brought in new lighting, sinks, custom cabinets, millwork, paint, baseboards, and furniture. Additional highlights found at the renovated space include:

• Children’s Vision: The kiln walls were painted by the children of the Boys and Girls Clubs of San Francisco, Mission Clubhouse in collaboration with a local graffiti artist. The children were encouraged to express themselves by painting as they saw fit. Some kids left their mark by placing handprints onto the wall.
• Local History & Sights: There is a 1993 mural of LeRoy Neiman’s “City by the Bay” featuring San Francisco landmarks like the Bay Bridge, Ghirardelli Square, and the Transamerica Pyramid. Another mural that dresses a wall is LeRoy Neiman’s 1978 “Willie Mays” mural. Willie Mays, the ‘Say Hey Kid,’ is an American former Major League Baseball player who spent almost all of his 22-season career playing for the New York/San Francisco Giants
• Continued Support: In addition to a new arts studio, Good Tidings also donates art materials and even covers the salary of art instructors depending on the financial need of each arts studio location. A majority of the services and products supplied to LeRoy Neiman Arts Centers are also donated.