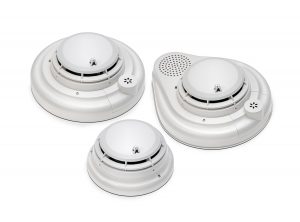 The UL 7th edition polyurethane tests better represent the type of smoke and flames produced in modern building fires due to the increased use of synthetic furnishing materials that can ignite and burn faster than other materials. The cooking test was added after research showed people frequently disable smoke alarms due to nuisance alarms caused by cooking and shower steam.

The new TrueAlarm sensors provide earlier detection, better fire type recognition and fewer nuisance alarms. They use sophisticated algorithms to analyze particles and determine whether they are generated by an actual fire rather than smoke or steam from cooking. Sensor alarm points can be programmed for timed, multi-stage operation per sensor. A lower percentage alert can cause a warning prompt to investigate the issue while a higher programmed percentage will initiate an alarm.

“The design of our new sensors is based on decades of fire detection experience and demonstrates our commitment to creating the most innovative and reliable products in the industry,” said Peter Ryan, senior commercialization manager, Global Fire Detection Products, Johnson Controls. “These re-designed smoke sensors reduce the number of nuisance alarms while providing early notification, when needed, to help building occupants evacuate quickly and safely during a fire event.”

The ability of the redesigned TrueAlarm sensors to intelligently differentiate between high-risk fires and burning food or steam is especially important for commercial spaces such as hotels, dormitories, hospitals and other facilities that are prone to nuisance alarms. The new 7th edition compliant TrueAlarm sensors are available for the Simplex product line.

About Johnson Controls
At Johnson Controls, we transform the environments where people live, work, learn and play. From optimizing building performance to improving safety and enhancing comfort, we drive the outcomes that matter most. We deliver our promise in industries such as healthcare, education, data centers and manufacturing. With a global team of 105,000 experts in more than 150 countries and over 130 years of innovation, we are the power behind our customers’ mission. Our leading portfolio of building technology and solutions includes some of the most trusted names in the industry, such as Tyco®, YORK®, Metasys®, Ruskin®, Titus®, Frick®, Penn®, Sabroe®, Simplex®, Ansul® and Grinnell®. For more information, visit www.johnsoncontrols.com or follow us @johnsoncontrols on Twitter.