Inside the majesty of the Boston Sports Institute 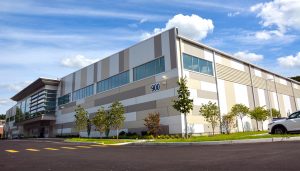 Boston, known for its dense saturation of academic institutions and leading sports teams, possesses an ironic gap within its metro-suburban landscape—that of a professional grade practice facility. Enter the sports ecosystem, a mixed-use concept where community and consumer value chain are new business partners.

A well-planned design strategy for any building correctly configures interaction, energy use, business growth and long-term interest. Client goals for this facility centered on operational efficiency, safety and diversity inclusion. With current competition being state-owned facilities with no debt, competitiveness in construction costs and operational savings was critical.

In a facility of this size, inefficient design cannot be overcome in the long-term; thus measures must be incorporated upfront. Additionally, the town required certain components to the facility, many of which at first glance seemed incompatible. 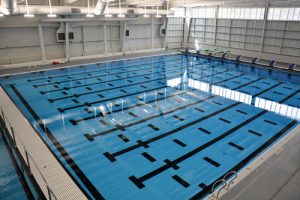 Wellesley is a Stretch Code community; thus the facility must demonstrate at least 10% improvement over baseline energy use intensity to satisfy the energy code requirements. Dacon, the facility’s design builder, based its architecture and material selections by targeting the most energy intensive building systems.

Creating symbiotic environments within extreme temperature conditions is an architectural paradox. To manage this level of complexity, multiple specialized systems were established, each tailored to meet the interior. Ice rinks and natatoriums are isolated from adjacent spaces to maintain required temperatures and relative humidity (rinks are typically 55° F and 48% relative humidity, natatoriums 82° F and 60%).

The field house is heated and ventilated only. These three major program elements occupy the corners of the building, separated by moderate heated / air-conditioned public areas.

Efficiency begins with selecting optimal insulation levels for the exterior walls and roof, followed by an enclosure system that provides an insulating value along with weather, air and vapor barriers. A key early decision was selecting a pre-engineered metal building system and a builder who could deliver the structural frame, wall cladding and roofing in a fast-tracked single package. The structural system consists of rigid frames built up from steel plates that span the large open spaces with a minimum number of interior columns.

For the exterior, Metl-Span insulated panels with polyurethane foam cores and painted galvanized steel facings on both sides act as the weather barrier, fulfilling the client’s operational and aesthetic requirements. This type of panel was also used on the natatorium’s roof, where the vinyl faced fiberglass insulation typically provided with pre-engineered metal buildings would not be suitable.

In the natatorium, a special painted finish for wet and corrosive environments is used, while the remaining steel structure is either stainless steel or painted with an anti-corrosion epoxy coating. Only 1% of the exterior is glass, positioned where it provides the most benefit to the swimmers. With sun glare being a potential safety hazard to lifeguard surveillance, window positioning was calculated using solar geometry. Windows are placed high on the north side, limiting direct sunlight on the water’s surface to a few hours per year.

There is approximately as much glass on the interior as there is on the exterior. Visual transparency between public areas and the arenas is a key parental design feature when multiple children use the facility. Walls separating the ice rinks and competitive pool include large windows that enable spectators to see the activity beyond, creating excitement before entering spectator seating.

For spectator and athlete comfort, chloramine gas—a corrosive byproduct of chlorine disinfectant that settles near the water’s surface—is exhausted through the roof via vents cut into the base of the swim team benches running along the pool deck.

Due to its architectural features and extended diversity measures, BSI was one of seven buildings in the US to receive the MBCEA award for excellence in metal architecture.

Energy conservation
Once Dacon optimized the envelope and provided interior environmental separations, attention was turned to system optimization. Electric energy use is primarily reduced by LED lighting throughout, reducing power density to 0.53 W/ft2. The irony of LED is that it produces very little waste heat unlike older lighting technologies, which slightly increases the load on the HVAC system during the heating season, so the system has to work a little harder than it used to in the past with older lighting technology.

The 102,000-square-foot roof will be leased in the future by the Wellesley Municipal Light Plant for a 900kW photovoltaic array that will double the town’s PV electrical supply, thereby reducing the town’s carbon footprint.

The chiller system that keeps the slab under the ice cold was also targeted for energy savings. The ice rinks use an ammonia chiller system with reciprocating compressors (same as the NHL rinks). While ammonia chillers are costlier, they are more efficient, saving 18% less electrical energy. This decision alone reduced the overall electrical energy use for the facility by 16.5%.

A significant amount of natural gas energy is required to maintain the pool water temperature; pool heaters are 89% efficient, but far more gas savings are realized using heat reclamation loops. Thermal energy extracted by the chillers to keep rinks frozen is gathered through heat reclamation loops to heat the pool, the most innovative energy saving feature of this facility.

The energy available to the heat reclamation loop varies throughout the year, but in the winter it is capable of offsetting 100% of the gas load necessary to heat the pool water. All these measures combined reduced the overall annual energy use by 23%, significantly reducing operating costs.

Human diversity
Encompassing a full range of human diversity, facility functions are expanded for maximum use via a movable bulkhead, chair lift and drop-in stair for the pools and private, gender neutral changing spaces. Elevators and accessible walkways ensure fluid access throughout the facility, welcoming all ages and abilities.

Due to its architectural features and extended diversity measures, BSI was one of seven buildings in the US to receive the MBCEA award for excellence in metal architecture. Additionally in August of 2020, the facility was named “Building of the Year” by the Metallic Building Company.