Inside the HVAC system that keeps iconic Federal Hall chill

Posted on September 7, 2020 by Mike Pallerino 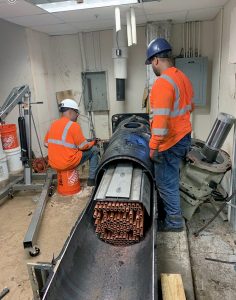 It is the location of the single most important invention ever conceived—the American Government. In the very heart of the Wall Street district of New York City, Federal Hall is a highly popular tourist destination run and operated by the National Park Service. You know the place. It is where George Washington was inaugurated as the new nation’s first President and where the first US Congress convened. It is, without question, one of the most historically significant buildings in the world—the original Capital of the United States of America.

As you walk through its halls, you can get a sense of a newly elected President and Congress legislated the creation of the departments of State, War, Treasury and Justice. Last year, more than 15 million people passed by. Of that group, 200,000-plus climbed the stairs to go inside, view the unique structure and rotunda, and peruse George Washington’s office and the Treasury vaults, which held more than $200 million in gold and silver bullion, and foreign currencies that financed the business of government.

In order to maintain the valuable and historic archives and to provide comfort for the staff and visitors, Federal Hall needed a new chiller. The National Park Service developed a set of requirements and posted a solicitation at SAM.gov requesting qualified contractors to provide written proposals, including listing references from recent and relevant chiller replacement projects.

That is when Philadelphia’s Keystone Construction reached out to Government Construction Experts, which includes a licensed Master HVAC Mechanic, Master Electrician and one of the most experienced federal contractors in the country. Keystone needed some help and knew where to turn. 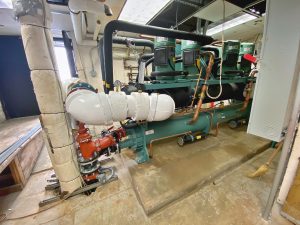 After receiving the contract award, Keystone Construction and Government Construction Experts went to work. Their first stop was the York division of Johnson Controls Inc., where they met with company’s sales representative, Brittany Garcia. Together, they needed to make sure what type of equipment could fit through the door opening and into the tight space at Federal Hall.

The American Made 140-ton York chiller was shipped from San Antonio to the Brooklyn yard of Skylift. After the NYDOT (New York Department of Transportation) approved a permit, Skylift delivered the unit to Federal Hall on Saturday morning, July 18, 2020.

Bringing on Manhattan licensed Master Plumbing and GC, Efrain Jimenez, Jr., to the team, the work was started after Governor Andrew Cuomo lifted the state’s stay at home order. First, the team removed 400 pounds of Freon from the old chiller. Next, they literally saw-cut the old chiller into pieces to remove it from the building and get the new one rigged into place.

Due to the pandemic, Government Construction Experts communicated daily from Austin, Texas with Jimenez and his team via FaceTime. Together, they worked through each and every detail—from the demolition, rigging, piping, electronic controls, 600 AMP power system, and coordinating the chiller startup and training with the National Park Service facilities management team.

Materials were supplied by Bruce Supply in Brooklyn, New York, Ferguson Supply in Manhattan, and Ideal Supply in Jersey City, New Jersey. To the delight of the National Park Service, the Keystone Construction team started the new chiller on August 25, 2020, several days ahead of schedule.

Even in the pandemic, Federal Hall will soon be open to visitors again—a life’s (Bucket List) item for every American clamoring for a sense of historical perspective.

Doug Reitmeyer is founder and CEO of Government Construction Experts. Known as the “No. 1 Federal Contracting Expert In The World,” Reitmeyer has worked on 1,000 federal contracts that have generated more than one billion dollars in revenue. He can be reached at Doug@GCExperts.com.

The Federal Hall backstory
Federal Hall National Memorial in downtown New York City marks where George Washington was inaugurated as the first US President on April 30, 1789. But the building on the site is not Federal Hall, which was torn down in 1812. The current building is a former US Customs House that opened in 1842, serving as the Washington Inaugural Gallery museum since 1939.

The structure solidified its place in history when the first US Congress drafted and approved the Bill of Rights in the building.

Beginning in 1785, it was the headquarters for the Confederation Congress at a time when the Articles of Confederation still were the governing document for the new nation. Once the current US Constitution was ratified in June 1788, City Hall was enlarged and remodeled in the Federal style by Pierre L’Enfant, the man who would go on to design Washington, DC. The structure solidified its place in history when the first US Congress drafted and approved the Bill of Rights in the building.

In the winter of 1790, the capital of the United States was moved to Philadelphia. Once it moved, Federal Hall returned to being a city government building, eventually being torn down in 1812 to make way for a new City Hall building. It was not until 1842 that the current building was completed. Built in the Greek Revival style, it was first used as a US Customs House, and then a US Sub-Treasury building from 1862 until 1920 when the Federal Reserve Bank replaced the sub-treasury system. It was also used as an FBI building and a passport office.

7 things you should know about Federal Hall
The dome at Federal Hall does not appear in any of the blueprints for the building. They added it on at the end, which helps provide light to the rotunda and the basement level through portholes in the rotunda floor. And that is not the only thing people do not know when they hear the story of the historic building. Here are six more things you probably did not know:

CR 2021 Retreats will be held Virtually starting March 2021 via Zoom.