How The Grill went from empty shell to upscale DC eatery 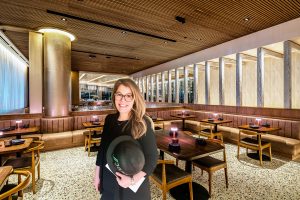 Located in the District Wharf area of Washington DC, The Grill marked one of the first //3877-designed restaurants to open in early 2020. A contemporary, upscale American eatery spanning 5,400 square feet, the project was a collaboration between //3877, a multi-disciplinary firm that focuses on single-family, multiple-unit residential, commercial, restaurant and hospitality projects, and KNEAD Hospitality + Design. Working together for a third time, the two firms were familiar with each other’s creative and logistical processes, allowing them to expedite the design phases.

They started off as most projects do, with a project kick-off design session to discuss the client’s vision for the space—its function, mood, color palette, the restaurant menu, and the general atmosphere they wanted to create for patrons. In tandem with creating the mood and vision, they worked through various floor plan options; the space is long and narrow, posing challenges as to how they wanted the kitchen to be oriented, where the bar would be situated, how the seating would be organized, and which location made the most sense for the restrooms.

In the initial design kick-off meeting, the client expressed interest in prioritizing an open kitchen to showcase the state-of-the-art Josper Basque Grill—a feature that became the first factor to determine the hierarchy of the space, making sure the grill was seen from all areas of the restaurant.

In a similar vein, the second space-planning priority was the bar, which would ideally be the secondary focal point of the space. To do this, //3877 and KNEAD envisioned the bar to be round, close to the entry, and to offer views of the kitchen while also seen by the seated restaurant areas.

Once these architectural details were set—a decision that took multiple iterations—they worked through the restroom and seating orientation. All-in-all, the design phase took approximately six weeks to develop, working through 10-15 different test fits.

The next design development stage took another six weeks to finalize. In this phase, the teams identified materials by assessing the details and interfacing with lighting design and MEP engineers.

The general contractor, Building Resources Inc. (BRI), was also brought-on during this stage. The teams learned that having the contractor on-board during this early stage in the process helped with cost estimating and pre-construction, allowing them to become familiarized with the project and, ultimately, enabling for a smoother construction phase.

For the next phase of permit, pricing and construction development drawing, they enrolled in Velocity—a Washington DC-based expedited permitting process that allowed them to fast-track the typical 12-16 week of permitting process down to four or five weeks.

From start to finish, construction took 28 weeks to complete, with kick-off happening on July 16, 2019, and the punch-list walk-through on January 31, 2020. The project space was delivered as the shell of a new construction building. One of the biggest structural changes made to the shell was replacing a portion of the existing storefront along the water and adding a storefront along the north west wall. This allowed them to increase the natural daylight in the space and expand the views to the water and beauty of the District Wharf.

Looking out on the water
Housing 108 seats inside, with an additional 82 seats on the enclosable, wrap-around outdoor patio that faces southwest out over the water, //3877 worked with KNEAD to create a polished, mid-century modern design that favors sophisticated Miami influences—like plush banquettes, poured terrazzo flooring, and rose gold accents. Soft colors such as the pale pink on the ceiling combined with bleached oak, handmade tiles, and copper accents define the lightness of the overall space and balance with darker walnut paneling to provide some drama to the subtle color story.

Upon entering the vestibule, guests are greeted with linear wall-paneling that is bathed in light, projecting movement and texture. As patrons approach the monolithic concrete host stand, a low ceiling and illuminated columns provide intimacy and focus for the check-in experience. That ceiling then ascends, providing the guest direction toward the bar and dining area. The three-sided bar anchors the space as a focal element, featuring a glass, rose gold and wood back bar and a custom, rose gold chandelier from Juniper lighting.

The Grill’s construction process was quite a seamless one, despite a number of moving parts and key players.

Also working closely with lighting designer Flux Studio, //3877 and KNEAD emphasized the drama of the space through a thoughtful lighting program; the stepped ceiling and cove lighting take full advantage of the high ceilings, enhancing the dramatic views of the Potomac River. The cove lighting, accented with a rose gold paint, creates a shimmery, incandescent effect, reminiscent of the waters and sunset found surrounding Miami.

Above the bar, a gold chandelier scallops the ceiling, anchoring the space to further enhance the “Mi-Mo,” or “Miami modern” vibe. Comprised of a few hundred suspended pieces from Juniper lighting, this installation took a lot of heavy installation coordination between the general contractor, the electrician, the design team, and the lighting manufacturer, in order to determine how to best conceal the blocking for the fixture and LED drivers behind the pristine-stepped gypsum board ceiling.

BRI used a 3D-laser projector to plot all of the chandelier attachment points up onto the plywood blocking, so that rough-ins could be coordinated. Once the finished ceiling was installed, BRI replotted the exact points to finalize the install points for each piece. All this coordination was done ahead of time, with everyone involved from the beginning, so that by the time the chandelier was assembled and shipped to the site, BRI was able to install easily and efficiently.

For the open display kitchen, which showcases the aforementioned modern, wood-fired Josper Basque Grill, soft rose colored handmade tiles are the backdrop to the highly visible expo line. Moving further into the space, an illuminated interior trellis—crafted from textured wood and flanked by a decorative wine wall—connects the two seating zones of the restaurant. The front and back dining zones are defined by fluid curvilinear banquettes that create comfortable, intimate seating while simultaneously breaking down the open expanse of the restaurant.

For the back wall, which is seen as a focal feature from the exterior of the restaurant, we worked with Kalisher to create a custom, oversized mural that features a tropical, muted palette, with palm trees and birds—a nod to the lush atmosphere of Miami’s South Beach. Tucked away at the back of the space, the restrooms transport the guest to a Miami paradise with tropical mural tiles and cracked ceramic tiles with custom pink grout.

Ultimately, The Grill’s construction process was quite a seamless one, despite a number of moving parts and key players.

About the Designer/Author—Meghan Scott, //3877
Meghan Scott is a multi-disciplinary designer at //3877, a multi-disciplinary firm that focuses on single-family, multiple-unit residential, commercial, restaurant and hospitality projects. Scott has degrees from The George Washington University and Savannah College of Art and Design.

She began her career in the fashion industry specializing in Brazilian swimwear and lingerie, advancing to Creative Director, where she led design teams across six divisions, multiple brands, in addition to, private label design. After spending years in fashion, she made the career shift to interior design and architecture, bringing a unique perspective of the tactile in the built environment space.

Scott strongly believes that design is all about the user experience. While a design consists of a multitude of moments, elements and details, some of which are sometimes never noticed, the design’s true success is found in the feelings and emotions of those with whom it interacts.