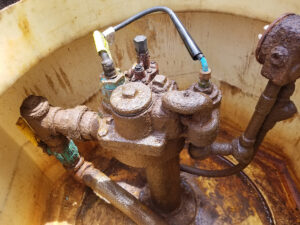 In 2014, the National Institute of Standards and Technology (NIST) issued a nationwide report indicating that ethanol-blended gasolines were rapidly corroding many gasoline storage tank components such as sump pumps. NIST observed that Acetobacter aceti bacteria was likely converting ethanol vapors to acetic acid, which subsequently was causing severe corrosion on below-ground steel and cast-iron components. If left unchecked, this corrosion could lead to leaks in gas storage tank systems that could contaminate groundwater at some of the nation’s 500,000 service stations.

Corrosion in these systems has been a big problem ever since the first ethanol blends were introduced more than a decade ago, and the corrosion is particularly aggressive if water is also finding its way into the containment system,” said Terry Grapes, a supervisor at Severson Oil Company, Winona, MN.

“In early 2019, we did our routine inspection of our systems and found several of them to be corroded throughout – including the piping and conduits. I contacted our Fluoramics rep and asked him which of his rust preventatives could stop this rust from progressing. A few days later, he met me at one of the locations. We used a brush to apply HinderRUST® HV100 to all surfaces in the system. That was nearly three years ago, and the corrosion has been completely halted. You can see how the HinderRUST migrated across all the surfaces and has formed a barrier to stop corrosion.”

HinderRUST is a rust stopper and lubricant engineered to displace water, bond to the surface, and provide surface film management against rust by creating a thin film of anti-corrosion properties to serve as a barrier against salt and water. 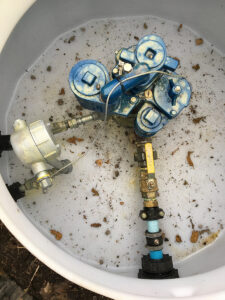 Two years ago, Grapes completely renovated the containment systems at one of his stores, putting in three new sump systems. Once these were installed, he sprayed all the surfaces with a can of HinderRUST HV100 Aerosol. “Today they look as good as new – no rust whatsoever,” says Grapes. “We even sprayed the inside of the spill bucket lids, and these, too, remain rust-free.

“Independent service stations like ours are all battling these corrosion problems, and the cost of putting in a new containment system can easily run more than $5,000, so we are very motivated to maximize the functional life of our systems. HinderRUST is obviously an important tool in achieving this. We try to reapply HinderRUST spray on a quarterly basis, and this has effectively put an end to our rust problems in each of these systems.”

Fluoramics, Inc is a solutions provider manufacturing engineered sealants, greases, lubricants, and rust inhibitors. Founded in 1967, the company is based in Winona, Minnesota, and proudly manufactures its products in the United States. To learn more about Fluoramics’ products, please visit the company’s website at http://www.fluoramics.com.