Helpful house design has an eye on history 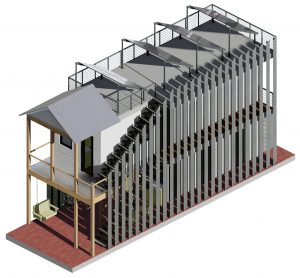 The initiative by the Houston Freedmen’s Town Conservancy would provide walk-in support for neighbors during hurricanes, power outages, sewer backups and other crises.

Atkinson’s “Shot in the Dark,” a two-story, “modified” shotgun house designed around a 1,525-square-foot plot on Cleveland Street, was also named the audience favorite among six finalists in the virtual event in early August.

She said her design pays homage to the historic structures now largely lost to Freedmen’s Town and as a celebration of Black contributions to architectural history.

The design incorporates solar panels, rainwater collection, indoor and outdoor storage space, a kitchenette, three restrooms with showers, a community refrigerator, Wi-Fi and shaded outdoor seating. Louvered walls along the sides would allow for airflow and give neighbors privacy.

She said the roof-mounted solar panels could also be converted into emergency shelters if needed.

While the elongated parcel suggested the layout, Atkinson said it was surprising that only she and one other finalist incorporated shotgun designs. “The other four proposals made no mention of the form,” said Atkinson, who earned a bachelor’s degree in urban planning at the University of North Carolina at Chapel Hill and is preparing for her second year at Rice.

“I think that was a source of most of the criticism from the jurors, that they didn’t respond to the context or acknowledge the history of the site,” she said. “When I was coming up with my design, it was almost too obvious to me.”

“What the whole panel really adored is that she has such great perspective, light years beyond the effort a student would normally go through to understand the context of the site,” said Zion Escobar, executive director of the conservancy. “She did a great retrospective on the district and the impact of I-45’s construction (which uprooted 40,000 residents of Freedmen’s Town in the 1950s).

“She also acknowledged the art of John Biggers and his shotgun homes, a very strong form architecturally that resonates with the heritage and the history of the community back to its African roots,” Escobar said. “And so we appreciate that she doubled down on that traditional topology, as opposed to taking some kind of new modernist approach because, ultimately, we are a heritage district.”

Atkinson noted her design incorporates a covered front porch as a community space. “I didn’t want it to only be a space for times of emergency, because it’s going to be there in good times and bad,” she said. “It should house resources that are available to the community 24/7, whether that’s access to Wi-Fi or places to charge devices.”

She said her inclusion of bathrooms surprised at least one juror. “I was very aware of the problem after the freeze in February,” Atkinson said. “My plumbing was messed up for weeks, and I was thinking about how bad that would have been for families.”

Escobar said there’s much work ahead to determine where or even whether the hub can be built, but she’s committed to seeing that Atkinson’s ideas be part of the plan going forward. “Whatever we’re able to build, the intention is that Rae will be part of that team.”

This news release can be found online at https://news-network.rice.edu/news/2021/08/16/helpful-house-design-has-an-eye-on-history/ Located on a 300-acre forested campus in Houston, Rice University is consistently ranked among the nation’s top 20 universities by U.S. News & World Report. Rice has highly respected schools of Architecture, Business, Continuing Studies, Engineering, Humanities, Music, Natural Sciences and Social Sciences and is home to the Baker Institute for Public Policy. With 3,978 undergraduates and 3,192 graduate students, Rice’s undergraduate student-to-faculty ratio is just under 6-to-1. Its residential college system builds close-knit communities and lifelong friendships, just one reason why Rice is ranked No. 1 for lots of race/class interaction and No. 1 for quality of life by the Princeton Review. Rice is also rated as a best value among private universities by Kiplinger’s Personal Finance.