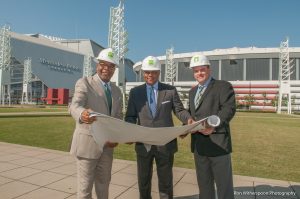 There aren’t too many companies that can claim to be a bigger part of constructing Atlanta’s skyline and urban development than H.J. Russell & Company (Russell). It was the late Herman J. Russell – nationally recognized entrepreneur and philanthropist, and the founder of one of the nation’s most respected and sustainable minority-owned business empires – who invested in developing the west side of Atlanta before the west side was trendy.

It is the west side of Atlanta where, exactly 25 years apart, the highly anticipated Mercedes-Benz Stadium, built with Russell’s involvement as part of the HHRM Joint Venture (JV) (Holder, Hunt, Russell, Moody), and the soon to be demolished Georgia Dome was built as part of the Barton Malow, Beers, Holder, Russell JV.
As Russell’s first joint venture sports and entertainment venue project disappears from the Atlanta skyline, a new venture emerges. Russell announces it will leverage its 25 years of industry-specific expertise in this increasingly sought-after and competitive market, and launch S.P.A.C.E. Venues – a division of H.J. Russell & Company Construction/Program Management Services to focus on Sports, Public Assembly, Convention and Entertainment venues.

“As a family-owned company, with more than 50 years to our back, we’ve been a part of building three iconic stadiums that currently grace Atlanta’s skyline within a span of a quarter of a century,” said Michael Russell, CEO, H.J. Russell & Company. “It humbles us each time to know we’re building a facility that plays such an important role in not only the sports and entertainment fabric of Atlanta’s infrastructure, but that the facility will also be the backdrop for a lifetime of memorable experiences for millions of fans and visitors.”

In addition to positioning itself to meet the sports facility and public assembly program management and construction needs of Atlanta, Russell is expanding its market reach. As proven by their 2016 completion of the Smithsonian National Museum of African American History and Culture in Washington, D.C., the American Airlines Center in Dallas, the Phoenix Convention Center, the Greater Richmond Convention Center in Virginia, and McCormick Place in Chicago, Russell has and will continue to explore and impact sports, entertainment and public assembly spaces in other markets throughout the United States and beyond.

“We believe we can, with our experience, help other markets and communities shape their skylines and sports, convention and entertainment patron experiences by building exceptional facilities just as we have and will continue to do in Atlanta,” said Russell. Referencing the Olympic Stadium, Turner Field and now Georgia State University’s Panther Stadium, he continues, “You know you’ve built a quality structure when it has stood the test of time and has changed names and purposes three times since it was built.”

Recently, Russell hired Bryan Jackson as its vice president to lead its program management division. His 23 years of local and global experience in program management and construction brings additional operational expertise to the team.

“We want to strategically offer and package our decades of expertise with other markets and shorten their learning curve with solid benchmarks, solutions and concepts,” said Jackson. “We’re excited to share our wealth of knowledge to help build more state-of-the-art facilities around the country that will exceed the expectations of visitors and fans from the outside in.”

To underscore its commitment to this vertical, Russell also retained the sector expertise of industry executive HB Brantley, a 30-year veteran of the architecture, construction and program management industries, to bring additional focus to the sports and public assembly market concentration of the company. Brantley specializes in the strategic planning and delivery of high profile sports, cultural and entertainment projects.
“I am both excited and proud to be a part of the S.P.A.C.E. Venues division for H.J. Russell & Company because of their reputation, stability, longevity and nimble entrepreneurial spirit,” said Brantley. “Russell demonstrates operational expertise and has the ability to strategically team with multiple joint venture partners. Their body of work and commitment to excellence is unparalleled.”

About H.J. Russell & Company
Founded in 1952, H.J. Russell & Company is one of the largest minority-owned real estate development and construction services firms in the United States. A multi-faceted organization providing integrated solutions and an exceptional customer experience, Russell has developed, designed/built, renovated and managed some of the nation’s most complex and high profile projects involving multiple stakeholders and requiring exceptional diplomacy and skill. Visit www.hjrussell.com to learn more about the firm.