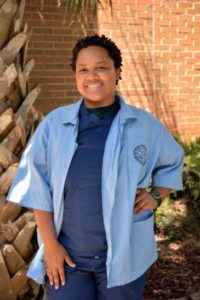 “I grew up with everyone in my family being a Marine and I knew the Navy would be my branch,” said Shanks.

Growing up in Grayson, Shanks attended Beaufort High School and graduated in 2018. Today, Shanks relies upon skills and values similar to those found in Grayson to succeed in the military.

“Family is what you make of it,” said Shanks. “While moving around, I made close connections and maintained friendships.”

Navy Medicine Readiness and Training Command (NMRTC) Pensacola, also known as Naval Hospital Pensacola (NHP), is older than 26 U.S. States and is in its second century of service. It is one of the country’s oldest and most respected military medical facilities. NHP continues to provide health care to over 150,000 beneficiaries in its main facility and ten branch clinics across five states.

Today, the sixth Naval Hospital building was the first to be built outside of the NAS Pensacola installation. Initially commissioned as the Naval Regional Aerospace Medical Command in 1978, it continues its mission of providing healthcare to America’s heroes and their families throughout the Gulf Coast region. In 2001, a 2-story, 73,000 square foot Outpatient Clinic was added to the Naval Hospital.

NHP’s mission is to deliver high-quality healthcare to warfighters and beneficiaries, ensuring a medically ready force through strategic integration, innovation, and well-trained personnel.

Serving in the Navy means Shanks is part of a team that is taking on new importance in America’s focus on rebuilding military readiness, strengthening alliances and reforming business practices in support of the National Defense Strategy.

“Our mission is bold, yet achievable on water, air and land,” said Shanks.

With more than 90 percent of all trade traveling by sea, and 95 percent of the world’s international phone and internet traffic carried through underwater fiber optic, Navy officials continue to emphasize that the prosperity and security of the United States is directly linked to a strong and ready Navy.

Shanks and the sailors they serve with have many opportunities to achieve accomplishments during their military service.

As Shanks and other sailors continue to train and perform missions, they take pride in serving their country in the United States Navy.

“The Navy is a great steppingstone in the right direction for me,” added Shanks.