Two years ago, Capri Senior Communities set out to replace a beloved community church and adjacent unused buildings with a six-story, senior-care campus and adjoining church. St. Rita’s Church in Milwaukee’s Lower East Side was built in 1939 and was the heart of the Italian American community. The new St. Rita Square was designed to honor that history and sense of community in its design, including the relation of its worship space to residences. Echelon’s Cordova Stone™ was chosen to tie into the Sicilian architecture that was identified as a precedent for the design of St. Rita Square.

St. Rita’s school and convent were no longer used and were severely in disrepair. The church itself needed some maintenance but was also outdated in terms of accessibility. There were 14 exterior steps to traverse before entering the church, no air conditioning and no main floor bathrooms. Not only was this cumbersome for parishioners with mobility issues, but it posed extreme difficulty for pallbearers during funerals. Inside, church dinners were held in the basement, without use of an elevator. The design of St. Rita Square sought to tie the living spaces easily to the worship space.

“Many senior living centers will include a flexible space that can serve as a chapel among its many functions,” says Amy Schoenemann, director of real estate development at Capri Senior Communities in Waukesha, WI. “However, I’ve never seen anything to the extent of St. Rita, with a full church directly attached to a senior campus.  Weekly church services, quarterly spaghetti dinners which accommodate thousands throughout the day, and ongoing events can find synergistic purpose between the church and our senior community.”

The architect incorporated design influences from both St. Rita’s and Our Lady of Pompeii Church, located in the Historic Third Ward before it was demolished in 1967. Overall, the design of the senior living community incorporates setbacks at varied heights to maintain a sense of modesty and scale, while providing residents with spectacular city views. The design of an outdoor courtyard, or piazza, was a key programming component. “Italian piazzas are thought of as the heartbeat of Italian towns,” explains Eric Harrmann, chief design officer at AG Architecture, who designed the project. “The piazza was created to be the heartbeat of this community, framed by the strong Sicilian feel of the masonry walls.”

The Cordova Stone was recommended by General Contractor Pepper Construction during the value engineering phase of the project. “The plans originally called for the building to be 100 percent stone, but that couldn’t be supported by the budget,” explains Ryan Eberly of Pepper Construction. Based in Chicago with offices in cities including Milwaukee, the company regularly works on large, complex projects such as St. Rita Square. “We recommended Cordova because it fit within the budget, matched the intent of the design and has the kind of durability required to endure Milwaukee’s four-season climate. What’s more, it’s a product we, the architect and masonry contractor were all very familiar with and had previous success with on other projects.” 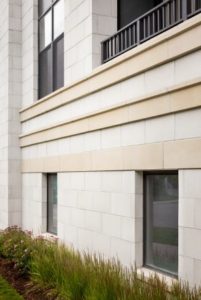 Arteaga Construction, the masons on the project, also recommended Cordova when they were asked to find cost savings in material and labor. “Cordova Stone was the obvious choice,” says Jamie Sadowske, field superintendent and project manager for this project for Arteaga.  “We knew the product would sustain the elements of the project as well as Milwaukee weather.”  He adds he also felt confident with Northfield as a supplier who, “knows how we operate and would be accountable throughout the scope of the job.”

Originally, 12” x 18” Cordova was specified for the facing of all six stories of the building. “It takes two men to lift each large stone, however, and that was impacting both the workforce required and the budget. The architect instead chose to instead use the larger stone at eye level (the bottom three stories) and then moved to the smaller Cordova (8” x 18”) for the higher levels,” says Eberly.

“The reduced size stone also helped show the layering of the architecture, as the horizontal bands separated ‘layers’ of stone,” explains Harrmann. “The light-colored Cordova Stone and the horizontal layering of material and banding in this way is influenced by the type of Sicilian architecture the client wanted to reflect in this project.”

Given its downtown location, the project had some challenges. “It was a logistically complicated project being in downtown Milwaukee. There was zero lot line and we had to reroute both a public alley and utilities before we could begin constructing the new building,” says Eberly of the 1.1. acre site.

“Limited space on site was a challenge, so real time shipments and next day delivery from Northfield was huge,” notes Sadowske.

Demolition began in August of 2018 and Pepper Construction took over the site in October, starting with the rerouting of the alley and utilities. To reduce costs, the masonry from the old buildings that were demolished on site was crushed and used as foundation backfill for the new buildings. “This saved the developer hundreds of thousands of dollars,” says Eberly.

Construction began going vertical in December that year and Pepper Construction was getting ready to finish in the spring of 2020 when COVID hit. “With the delays that caused, it worked best to turn over the building to the owners in stages. We delivered the church and Independent Living Tower in June of 2020 and the Assisted Living/Memory Care tower in August,” Eberly.

At more than 182,000 square feet, the finished project includes a newly constructed St. Rita Church with 3,600 square feet on the first floor and a lower-level fellowship hall with a servicing kitchen. There are two apartment towers that make up a 118-unit age-restricted senior living community that includes 72 independent living apartments and 46 community-based residential facility/memory support units. Fulfilling one of the critical goals of the project, there is now direct access from the residential area into the church. The church itself was dedicated and blessed but has not been open for full services due to the pandemic; there only have been private events such as baptisms and weddings. The spaghetti dinner event, typically held in the lower level fellowship hall, took an innovative turn by offering drive-up spaghetti dinners to-go.  More than 800 meals were dropped off through the St. Rita Square drive-under canopy to happy parishioners and community members supporting the church.

The new build incorporated 17 restored stained-glass windows from the original St. Rita’s, the bronze bell from Our Lady of Pompeii, a bronze statue of the Angel Gabriel which was cast in Florence in 1904, and 10 statues of saints from both churches. Also, installed above the front entry of the new church at St. Rita is a new six-foot-diameter signature rose window depicting the logo of the parish to which the church belongs, Three Holy Women. The bronze bell was originally part of Our Lady and had been stored at the Italian Community Center for a long time before finding its new home.

Additionally, all the stained glass and statuary from the old church were built into the new church and the piazza space. Stone works such as the original entablature stone and signage from the church were saved on the exterior wall as part of the cladding, built into the courses of Cordova Stone.

Capri Senior Communities sold the church portion of the property, which sits on about a quarter acre, back to the parish for $1. Capri owns the remaining acre of property and the St. Rita Square building. Capri Communities is ranked one of the largest Milwaukee-area retirement communities by the Milwaukee Business Journal and has been nominated for Senior Housing News 7th annual Senior Housing News (SHN) Architecture & Design Awards in the independent living category.

“Eric did a really good job of creating a building that will stand the test of time in downtown Milwaukee. It looks like such a classical building,” says Schoenemann. She notes there has been a building renaissance in Milwaukee with many multifamily structures built with a modern, super-contemporary vibe. “Ours, with the senior community and relationship with St. Rita’s, has a classic look that will forever be in style.”

Echelon Masonry is North America’s largest manufacturer of the highest-quality masonry products for the architectural and masonry industries. As the consolidated masonry brand for Oldcastle APG, a CRH Company, Echelon offers the widest masonry portfolio in the industry, from trusted brands like Trenwyth to innovative product solutions like the InsulTech System, as well as the localized, one-on-one support needed to bring the most ambitious projects to life. Since 2015, Echelon Masonry has been committed to supporting the time-honored tradition of masonry and advancing the craft for the 21st century and beyond. www.EchelonMasonry.com