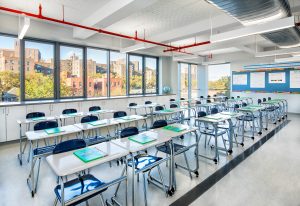 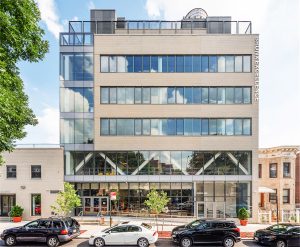 The Bronx Charter School for Excellence, also known as Bronx 1, has earned a coveted LEED Silver certification from the U.S. Green Building Council (USGBC). This high performing school, located at 1952-1960 Benedict Avenue in the Parkchester neighborhood of the Bronx, serves over 800 students in grades K-8. Bronx 1 is currently one of the most competitive charter schools in New York City. CTA Architects led the design team, JLL served as the owner’s representative, and JLL’s Energy & Sustainability Services group was the LEED consultant.

According to CTA principal Craig Tooman, AIA, LEED-AP, “The design of this project to meet LEED criteria was a challenge because the construction budget was relatively modest as the funding was generated through donations. However, every step of the project, from preliminary design through construction, was made with the goal of achieving the highest LEED rating possible in mind while meeting budget constraints. We were able to meet the criteria for Silver certification through a collaborative effort with the entire project team, and construction was completed under budget.”

LEED guidelines, established by the U.S. Green Building Council, deliver a comprehensive framework for sustainable building design, construction, operations and performance with the goal of developing healthy, highly efficient, and cost saving buildings. Certification is achieved through a detailed application process, with an independent third-party reviewer analyzing each project’s information and assigning points in seven distinct categories that rate the project’s compliance with green building criteria. One of four certification levels, listed in order of increasing value, can be awarded: Certified, Silver, Gold, and Platinum.

In addition to CTA and JLL, the project team included Collado Engineering as the mechanical, electrical, and plumbing (MEP) engineer; Robert Silman Associates Structural Engineers, DPC, as the structural engineer; Hubert H. Hayes, Inc. as the elevator consultant; and Municipal Building Consultants, Inc. as the expediter.

“The important lesson learned from this project is that an efficient sustainable building can be designed within the confines of a limited budget,” adds Hrisa Gatzoulis, LEED AP, WELL AP, JLL Senior Project Manager. “Through inventive, but budget conscience design, the team has delivered a highly sustainable and energy efficient facility where students can excel for years to come.” JLL also conducted numerous training sessions for the general contractor and subcontractors to ensure that the construction process followed LEED criteria.

The existing two-story building is a brick clad wood and steel structure. Increasing student enrollment necessitated a major expansion. CTA provided the additional space through the design of a new seven-story tower on one side and a two-story annex on the other. The project also included several layout changes and an upgrade of finishes in the existing building. A total of 18 classrooms were created in the new tower and five were added in the two-story annex. The original school building featured 12 classrooms. Following the expansion, the school complex now houses 35 classrooms.

The tower, a steel structure with a pile foundation, houses a cafeteria with a teaching kitchen, usable roofs, a student lounge with accessible deck, traditional classrooms, and a high-school grade science laboratory. A key feature of the tower is an impressive full-sized, two story gym, which extends the full height of both the basement and first floor and is visible through a full height glass partitions in the main lobby.

Craig Tooman, AIA, LEED-AP, the CTA principal in charge of the project, explained that the placement of the gymnasium was something of a challenge. “Due to the building’s setback requirements dictated by the local zoning laws, we could only put the gymnasium on the bottom two floors. The gym floors had to be wide-open, column-free spaces, so we installed large structural trusses on the floors above,” she stated. Four trusses run through the third floor, from which the floor of the cafeteria, located on the second floor, is suspended directly above the gymnasium and part of the first-floor lobby. The hallway cantileveres over the perimeter of the gymnasium. Visitors can see some boxed-in trusses in the classrooms on the floors above, all of which makes for a very interesting – and complex – structural design.

The two-story annex, coupled with the existing building, is used primarily for the younger students, while the middle school-age scholars use the tower. The annex is very similar in appearance and feel to the tower, with both using similar structural elements and finishes. The brick façade of the existing building was painted to be a similar color to the new buildings.

When selecting building materials, the team considered several factors, including local sourcing, recycled content, low-emitting materials, and performance values. The two stairwells feature an ultra-high-performance energy efficient reinforced concrete Fibre C façade rain screen panels by SAR Facades, which minimize heat loss by eliminating thermal bridging. The rain screen is anchored to a stud backup, and the assembly provides a balance of pressure behind the wall that inhibits water infiltration into the building interior. The remainder of the façade is clad in a concrete panel curtain wall by Oldcastle. The roof is a reflective membrane by C-Plus that will reduce the heat island effect.

Finishes include glass walls in the corridors, offices, and study rooms, making the hallways feel more open and enabling natural light to permeate to the center of the building. Walls are primarily painted. Traditional acoustical ceiling tiles were used in the corridors. However, in classrooms, foam panel ceilings adhered to the underside of the deck above were used to meet acoustical properties required by LEED guidelines, while maximizing ceiling heights and exposing the structure.

The lobby has a recycled content poured-concrete floor. The gymnasium floor is made of Forest Stewardship Council-certified wood. Other floors throughout the building are Mannington Touchstone vinyl composition tile (VCT) and glazed ceramic tile, both of which contain recycled content.

Bright and bold primary colors were used throughout the design scheme to create a stimulating yet playful education space.

CTA placed particular emphasis on maximizing daylighting and views throughout the building without compromising energy efficiency. To minimize the need for artificial lighting, the ground floor lobby, cafeteria, and classrooms facing the street are wrapped in a glass storefront and curtain wall systems to allow natural light into the interiors. Lighting is provided by high efficiency LED fixtures provided with light sensor controls. As the building fills with natural light flooding through the high windows during the day, light fixtures automatically shut off to conserve energy, and turn on again as exterior lighting conditions change with nightfall. The sensors provide different levels of light depending on proximity to the windows.

To reduce heat gain from direct sunlight, the designers specified a sunshade system attached to window frames on the south elevation. The use of low flow lavatories and toilets has resulted in a significant reduction in the consumption of potable water.

When designing the HVAC system, Collado Engineering worked within the project’s limited budget to select mechanical components that would result in energy savings and meet LEED criteria for the optimization of energy. The firm specified mechanical equipment that features Merv13 filters and CO2 sensors to monitor the indoor CO2 levels and increase the amount of outside air when necessary. Karman Consulting performed the modeling of the mechanical system during the design phase.

Bronx Excellence has enhanced the teaching curriculum to integrate the LEED sustainability concepts embodied in the new building into various grade-appropriate New York State Science standards. For example, kindergarten students will collect old crayons and melt them into new ones while learning how recycled materials benefit the environment. Second graders will use the CO2 sensors on the building’s outdoor air monitoring system to learn about the environmental impact of air quality on people and plants.

Sixth graders will take advantage of the daylighting features in their classrooms to grow herbs indoors, and eighth graders will use the herbs in cooking projects that will illustrate the benefits of home gardening and the farm-to-table movement. The sustainable features of the new building will encourage students to develop values that will encourage them to become responsible stewards for the future of the environment.

Bronx 1 also encourages its students to be an integral part of the larger community, and the school has opened its doors to neighborhood groups to use the cafeteria and gymnasium for community events. A stair leads directly from the street to both spaces, providing a clear path into the school that provides separation between visitors and students. In addition, the building is conveniently located only one block from a subway station.

The firm’s projects also include the exterior renovations to the New York State Legislature Building in Albany, New York as well as an adaptive re-use of the historic Arcade Hotel in Bridgeport, CT’s Downtown South Historic District.