The Rocket Mortgage FieldHouse (formerly Quicken Loans Arena) is a multi-purpose arena in downtown Cleveland, Ohio. The building is the official home arena of the Cleveland Cavaliers of the National Basketball Association (NBA) as well as other major Ohio sports teams – it also happens to be the third- largest arena in the NBA, by capacity. 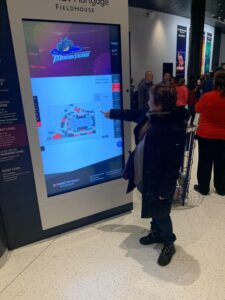 In 2019, the arena underwent a massive renovation and addition to the entire facility. Aside from the arena itself being completely reworked, management knew that a larger arena would also require an updated visitor, fan, and user experience that kept pace with the technology of the times.

The new arena brought more space, amenities, and generated a new level of excitement for the city’s beloved sports fan base. An eight-story-high glass atrium greets fans as they enter the facility. Fan gathering places like the Budweiser BrewHouse, and internal “neighborhoods” were added to give the arena a true destination feel. The building features stunning technology details that draw fans in, including a one-of-a-kind, fully immersive sensory experience that uses 8K video and LED panels called the Power Portal.

Initially, to meet the challenge of providing a robust, efficient, and central user experience within the sprawling multilevel sports arena, Rocket Mortgage FieldHouse (RMFH) sought out an interactive wayfinding solution from 22Miles in what would become the first phase of the arena’s technology upgrade. The initial project saw the addition of a double-sided kiosk from 22Miles, providing wayfinding for accessibility seating, concessions, clubs, and merchandise locations, as well as entertainment, including a custom selfie feature, where fans can take pictures with custom Cleveland backdrops.

New Innovations for a Post Pandemic Arena Experience When COVID-19 struck, RMFH, like everyone else, faced new challenges and needs for the facility. While the 22Miles kiosk provided a central place for visitors to easily navigate the massive facility, the safety, communications, and protection of fans, players, and staff brought on new concerns and feature needs.

RMFH, like many other NBA and sports arenas, went through a period of re-evaluation and assessment on how to best keep visitors and employees safe in the wake of the pandemic.

A fan uses the 22Miles kiosk for wayfinding pre-COVID. 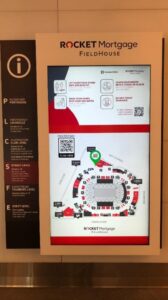 22Miles’ global reputation for interactive wayfinding and mobile technology initially appealed to the FieldHouse’s user experience-based vision, but now needed to pivot into post- pandemic modernization. There was a desire to ensure preparation for emergency messages and communication, mobile technology synchronicity, and expandability for future considerations. In essence, management wanted to continue to build on what they had, while keeping an eye on the future for what they may need.

22Miles interactive wayfinding with navigational mapping integration was added into the CAVS official mobile app, allowing users to easily view the building’s maps on-the-go, without having to search for physical maps throughout the building.

In addition to the mobile app, 22Miles built out more functionality into the RMFH digital wayfinding platform, adding QR codes to digital displays. Six displays throughout the arena feature a “You Are Here” QR Code, so that users can easily look for bathrooms, concessions, parking, and other destinations around RMFH directly from the app, reducing physical touchpoints.

wayfinding throughout the building.

Since organizations now must prepare for the unexpected and follow safety protocols set forth by the CDC and other officials, a portion of the displays also feature rotating health and safety messaging. Arena management also have the capability for the broadcast of evacuation and safety videos through timed script technology.

With the wayfinding and software updates for both mobile devices and displays in the arena, visitors can easily navigate throughout the building while remaining socially distanced, and access real-time announcements and changes as they come. The wayfinding feature was simply integrated into the existing CAVs app design, so there was no need for additional links or apps – users can simply access the feature from the same place they access the CAVs schedule, live-streams including replays, instant notifications during the game, and more. This functionality could easily be replicated and deployed for any professional sports arena of any size. The arena’s management team is pleased with the flexibility and functionality that the 22Miles solution brings.

Nate Ferrall, Director, IPTV, Cleveland Cavaliers, said of the project, “It’s all working perfectly and looking really good, and we are very pleased that part of the screen can be used for our health and safety messaging, as well as video broadcast of evacuation and safety. 22Miles wayfinding is live within our App (championed by Westfield), and this is the official mobile app of the NBA Cleveland Cavaliers.”

Learn more about 22Miles at 22miles.com.