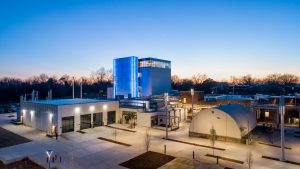 When The Momentary opened in February in Bentonville, Arkansas, directors of the contemporary art space chose to showcase a vertical dance troupe that performed on the building’s 80-foot tall projectable glass rainscreen facade. The underlying messages—both in terms of artistic highlights and building architecture—could not have been clearer.

The Momentary brings a unique array of cultural opportunities to the burgeoning community. The design of this contemporary satellite to the nearby Crystal Bridges Museum of American Art, including the innovative glass rainscreen by Bendheim, marries new materials while maintaining the integrity of the former cheese factory.

Wheeler Kearns Architects led the space transformation, delicately balancing old and new into one community jewel. “The Momentary will be an intersection of art and everyday life,” says Lieven Bertels, director of The Momentary. “Perhaps some of the original elements and industrial fixtures will inspire artists and the communities to think about their own evolution and this moment in time.”

A visionary beacon
The Momentary’s 70-foot tower serves as a beacon in the picturesque complex, inviting visitors to check out the space. The building is the first to use Bendheim’s glass rainscreen system as a projection surface. The custom-imprinted glass screen features the company’s new LumiFrit™ surface #1 fritted glass.

The 6,000 square foot cladding is used as a scrim around a new concrete stair and elevator tower. Patented clip attachments allow each glass panel to be installed and replaced independently to facilitate maintenance and accelerate installation. “This unique quality pushed the owner and us in the direction,” project architect Calli Verkamp says. The glass was installed by Advantage Glass of Tulsa. 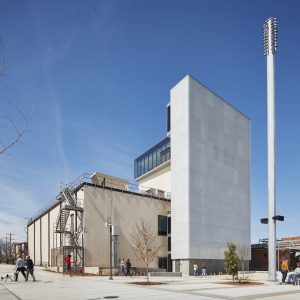 The front surface of Bendheim’s LumiFrit glass is optimal for reflecting light and can be customized in a wide range of decorative patterns. At night, the white frit pattern bounces front-projected light to create a sharp image. On the back of the glass, the company’s SatinTech® etched finish acts as a dispersion filter for LED back-lighting, turning the façade into a beacon of light.

The architects say the façade is designed to “activate the public space.” A façade that doubles as a digital art canvas is particularly valuable in today’s architectural environment, as outdoor venues are becoming a necessity to promote culture in a safer and healthier environment.

For The Momentary opening, the vertical dance troupe BANDALOOP staged a breathtaking performance on top of the glass. “This cutting-edge installation heralds a more positive and creative future,” says Robert Jayson, President of Bendheim. “We are pleased to see Bendheim glass used in such an unusual and captivating way.”

The BANDALOOP dancers were not the only group to take advantage of the creative possibilities provided by the innovative façade. The glass tower announced a recent blood drive, spearheaded by the Community Blood Center of the Ozarks and The Momentary, through its bright red back-lighting. “At The Momentary, every surface is considered a potential canvas for art,” Verkamp says. “The Bendheim rainscreen is no different. Not only does the glass have art printed on to it via the frit pattern, but we also wanted to be able to use it as a projection surface for video art. The location and size of the rainscreen make it the perfect backdrop for the project. It’s visible from a long distance given that it is one of the tallest buildings in Bentonville.”

The architects say the façade is designed to “activate the public space.” A façade that doubles as a digital art canvas is particularly valuable in today’s architectural environment.

A New Beginning
The overarching goal in the adaptive reuse project was to incorporate the existing building into the design of the new structure. “We’re maintaining the use of all the materials that were used to construct the building in the first place,” Verkamp says. “Instead of tearing down and starting from scratch, being able to reuse all of those materials and extend their life is a sustainable practice.”

Traces of the cheese factory can be found throughout The Momentary. The Wheeler Kearns team adjusted the industrial quarry tile floors for accessibility and safety, but kept them in place for the most part. They also kept the existing walls, flooring and ceiling in several rooms, and covered over in-place masonry with white drywall.

Other areas are not so subtle. Fermentation Hall, the former fermentation room for the cheese factory, takes advantage of the precast concrete’s acoustic isolation. It now is a state-of-the-art black box theater, featuring a variable acoustic system, high ceilings and retractable back seating for more than 100 people.

One of the dining options at The Momentary is The Breakroom, which was a work break space for workers at the cheese factory. Hydration Column and Culture Column also give clues to the former identity of the space.

The inaugural exhibition of The Momentary took place in the 24,000 square foot space known as “The Galleries,” the oldest part of the original building. There are also artist-in-resident studios, outdoor spaces with sculptures and a multidisciplinary performance space called The RØDE House, which formerly was the cheese factory’s milk intake room. The space can seat approximately 350 people and includes a bar, projection screens and a retractable roof for open-air performances.

The Momentary also throws back to a time earlier than the cheese factory, which occupied the site between 1947 and 2012. The area used to be Osage Nation hunting grounds, and graphic artist Addie Roanhorse designed the fritted glass motif on the new building with inspiration from traditional Osage clothing. 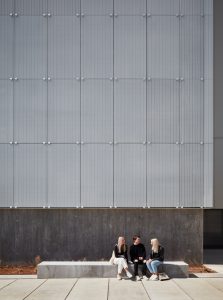 The Bentonville Arts Boom
Bentonville is widely known as the headquarters for Walmart, but there is much more to the community than the retailing behemoth. “Art is a central part of Bentonville’s appeal,” VisitBetonville.com says on its website. “Bentonville’s art scene has become a must-do experience for 2020.”

Crystal Bridges and The Momentary are just part of the arts and museum landscape in Bentonville. The Arend Arts Center, 21c Museum and yes, Walmart Museum, also are city linchpins. The Museum of Native American History houses more than 10,000 Native American artifacts. The Peel Mansion and Heritage Gardens is a Civil War era home available for tours and events.

The cultural explosion is occurring as the Northwest Arkansas community sees its population surge. It is ranked as the fifth fastest-growing US city, according to talkbusiness.net, and the population has reached nearly 55,000. In 1970, Bentonville’s population was just 5,508 residents. Nearly 20,000 have flocked to the city in the past decade.

Walmart, and relatives of company founder Sam Walton, still drive the economic boom in Bentonville. The Momentary was founded by the Walton family, and the founding chairperson, Olivia Walton, is the wife of Tom, grandson of the Walmart founders. The Momentary is based on the vision of Olivia, Tom and Steuert Walton.

While Bentonville will never be confused with New York, Paris or other high-profile cultural destinations, the city is finding its niche as a cultural haven for middle America. The Momentary is just one more piece to an evolving, diverse and beautiful cultural landscape. “Artists are at the center of everything you see here,” Bertels says. “They create the work, they influence our design, they make The Momentary what it is. We are delighted to have this opportunity to spotlight today, the work they are producing, and the role they play in our everyday lives.”

Thomas Renner writes on building, construction, manufacturing, and other trade industry topics for publications throughout the United States.